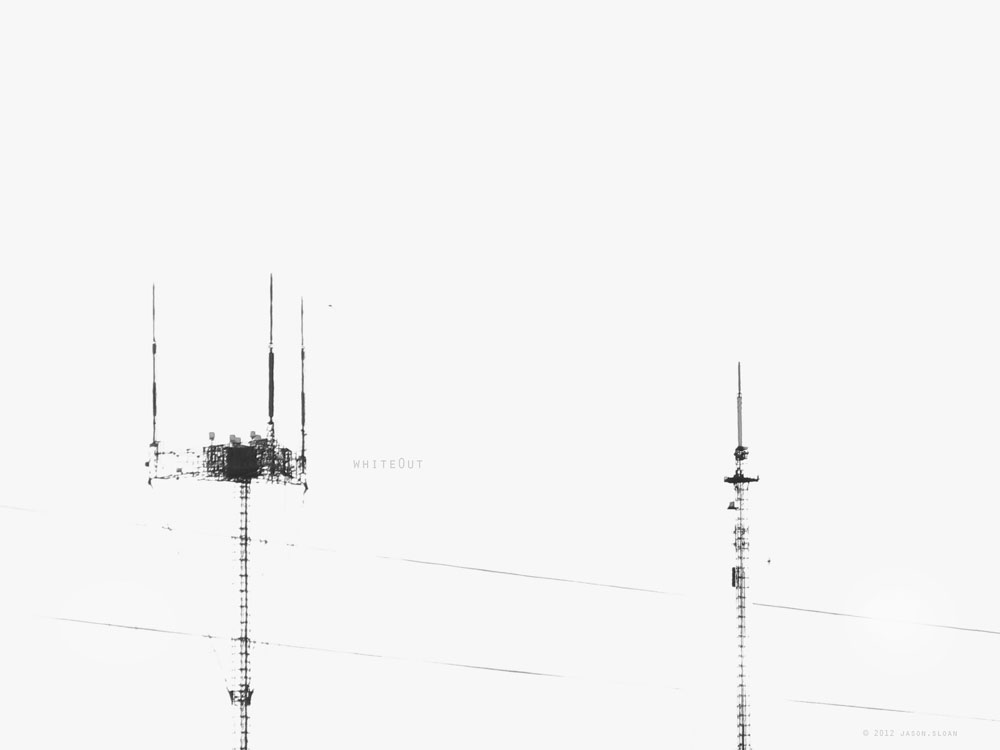 whiteOut is a new series of live FM transmission performances exploring and questioning the aesthetic of noise on the radio. These new textural works will be created live and in the moment through the use of multiple analog electronic instruments and a 7-watt FM transmitter. The performances will take place in undisclosed locations across the United States throughout the summer and fall of 2012. Documentation will appear shortly after each live set. Each work will be recorded directly off the radio as it was potentially heard by the listener.

I was about twelve when I first became aware of how beautiful radio noise could be. I recall laying in bed and listening to my portable shortwave radio, slowly turning the dial, but allowing for long pauses on the dead spaces, as I moved from one distant broadcast to another. At times, I think I was more interested in the sounds produced by the odd interference and signal modulation than the broadcasts themselves. I would often drift to sleep listening to the ghost like voices buried beneath layers of slow and undulating static. At that age, I didn’t think much about what attracted me to the noise. I just enjoyed its sometimes violent yet mysterious and relaxing qualities. Looking back on those late night listening sessions in the early 80′s, I’ve come to realize the impact they had on my own development as a sound artist and electronic musician. The seeds for my awareness of the radio as an expressive medium were probably planted during this years. Of course, I was totally unaware that artists like Neuhaus, Stockhausen, Vostell, Cage and others had already begun exploring the possibilities of the radio as an art form decades earlier.

With this in mind, two years ago I began to include live scanner feeds in my concerts and performances. Unlike shortwave radio, scanners pull from air traffic, police, ham and other types of local broadcasts within just a few miles of the listener. The idea of incorporating live, local transmissions into the performance as a sonic fingerprint of the local geography was appealing to me. I saw it as an aural snapshot of that very moment or even an invisible, stringed instrument of sorts.

Recently, I was in my car listening to the SPK debut album Information Overload Unit from 1981. About halfway through the albums opening track Emanation Machine R. Gie 1916, I became aware of how much it sounded like some of the textures and modulating frequencies I would listen on the shortwave for hours as a kid. I began to wonder if a musical performance of pure analog electronic “noise” was broadcast on the radio, how would a listener moving through the dial know what they were hearing was an actual broadcast? And if they did, how where they able to discern synthetic, controlled noise from pure generative noise? It is my hope that the whiteOut series of performances brings the very essence of noise, music and even our own environmental sonic awareness into question.

Below is an excerpt taken from the first performance.