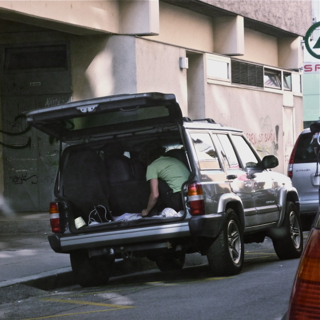 Radio Convoy was an acoustic experiment, initiated by Johannes Kubin and Marianne Lang. The unique transfer via self-made pirate radio station featured artistic sound recordings and audio posts by 20 (mostly visual) artists. The entire setting was mobile. This means not only the transmitter (the mobile sound studio) was on the road, but also the audience, who took up the chase, not to lose the signal.
The radio show was made up of short artistic contributions as well as self-created music tracks, live acts and performances set to music happening in the front car. Following Artists were featured at the Radio Convoy: Bertrand de Colombel, Maryse, Coralie de Gonzaga, Zweintopf, die Zitterpartie, Erstes Österreichisches Triangeltrio, Mike Ballard, H.C. Moser, Roland Hochenauer, Erik Hable, Hans Pollhammer, Kai Kuss, Johannes Kubin, Dorit Ehlers, Marianne Lang, Stephen, Mathewson, Ulla Rauter, Christine Schörkhuber, Traradio, Agnieszka Wellinger, Bernd Rohrauer and Karl Schönswetter.
Radio Convoy intended to raise questions: Which options gives a “pirate radio station”? Why the digression into an acoustic medium? Is the convoy a militant metaphor for “my car is my castle”? What for is this “hit and run” within a convoy, and where the journey will lead to? The different positions are patrolling between topics such as urbanism, mobility, radio piracy, artistic identity and medial stereotypes in art.
Radio Convoy was transmitted on Saturday 24th Sept. 2011 for one hour, at the Radia-Show you will listen to a recording of the live performance.
Radio Convoy was a contribution to the project Coded Cultures 2011.
Introduction Speaker: Barbara Kaiser
Recorded by Karl Schönswetter