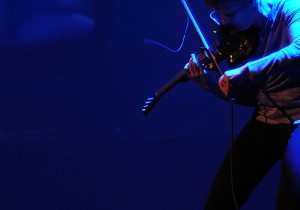 “Under the Radar” is a radio violin project by Mia Zabelka for the international sound art project “PhonArt – The lost languages of Europe”. The 9v battery for the pick-up on her electric violin is replaced with power from radio waves transformed to generate electricity.
The concept involves “opening up” radio space, integrating live elements and a soundscape of lost languages, which is processed using MIDI effects generated by the radio-powered violin.
Thus a “circuit of radiowaves” is constructed, transforming radio reception into power for the violin, which in turn generates sound and electronic and MIDI effects that are broadcast back into the ether.