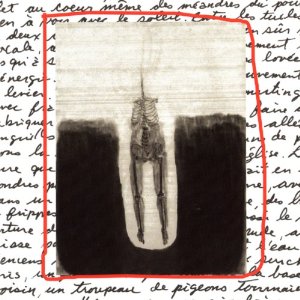 We wanted to work with written material. By the time we started, the texts we ended up collecting were quite varied. In the course of the process the texts lost their textuality and became representations, as all digital data were translated into sonic data.
We could have taken the word file and read it like sound, instead of reading the letters. But at some point we printed the text, scanned it, and read the scan as sound. Instead of reading the meaning of the ink, we said, the ink is black and it’s on a white page. Let’s listen to that in a digital world, and use this digital world as a subtext for the other text. And that’s what we did: we went deeper in the other text.
Sonically, the piece is extremely exciting, because it was a world of sound that was just so crazy. It felt just like archeology, because it is pretty much just dense noise. But once you listen to it, there is rhythms, words and forms might appear, but it is all within this massive noise landscape. It is almost like the end of the world, where all the words and texts have crashed together, and you just try to thread meaning through all these data. In some way it is what we are living, too: just trying to create a path. It was like reconstructing a story.