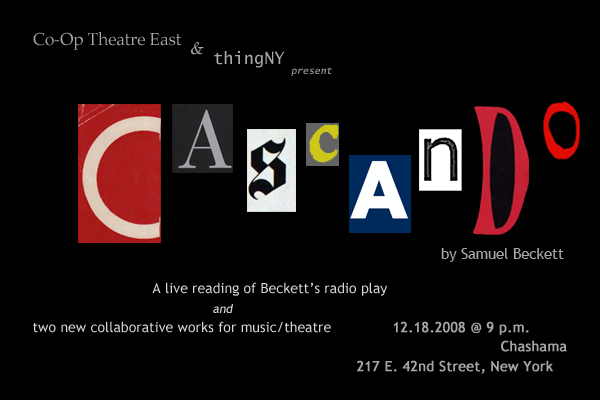 Cascando is a radio play by Samuel Beckett. It was written in French in December 1961, subtitled Invention radiophonique pour musique et voix, with music by the Franco-Romanian composer Marcel Mihalovici. It was first broadcast on France Culture on 13 October 1963 with Roger Blin (L’Oeuverer) and Jean Martin (La Voix). The first English production was on 6 October 1964 on BBC Radio 3 with Denys Hawthorne (Opener) and Patrick Magee (Voice).
“The play was originally to be called Calando, a musical term meaning ‘diminishing in tone’ (equivalent to diminuendo or decrescendo), but Beckett changed it when ORTF officials pointed out that calendos was the slang word for cheese in French.”[1] The term ‘cascando’[2] (‘cascades’) involves the decrease of volume and the deceleration of tempo.