In 1997 Deutschlandradio, the German National Radio, hosted the annual conference of the Ars-Acustica working-group of the European Bradcasting Union in Berlin. It was a 4 day’s meeting of about 40 International radio artists from most of European countries. At the end the host Götz Naleppa, media artist and at that time head of the radio-drama department of Deutschlandradio, proposed a “Jam-Session” of all the artists present.
Every artist contributed sound-samples – recorded or live, voice, electronic or field-recording – to this European Jam-Session. Götz Naleppa remixed later the studio-version, which can be heard on this CD. 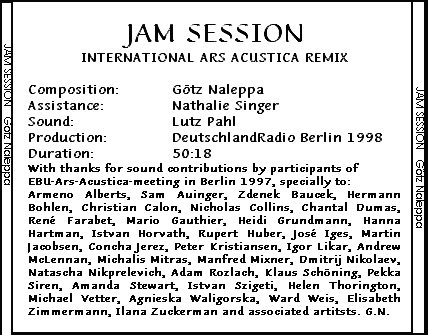 A mix with sound excerpts provided by the artists and producers present at the Meeting or represented with their works.