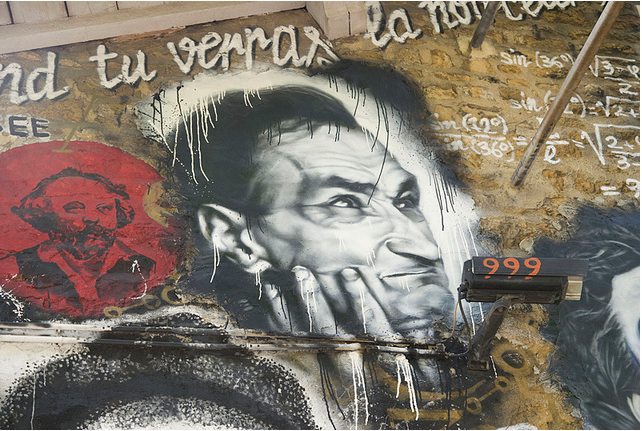 To have done with the judgement of god

A devil of a snag”- the story of a banned broadcast

Pour en finir avec le jugement de dieu, a work for radio by Antonin Artaud, recorded in several sessions in the broadcasting studios of the Radiodiffusion française, rue François-1er, Paris, between November 22-29, 1947, and immediately banned from the air, was to become as legendary as the famous conference he gave earlier that year at the Théâtre du Vieux Colombier, titled, Histoire vécue d’Artaud-Mômo (January 13, 1947, 9 pm).

It was the controversy surrounding this conference a few months earlier, and the rumours (including certain articles in the press) already in circulation on the broadcast in production, which in all likelihood attracted the attention of the Director-General of the Radio to the point that he asked for the recording. He banned the transmission immediately, the eve of the day it was scheduled to be on air, Monday, February 2, 1948, at 10.45 pm, as part of the series, titled, La Voix des Poétes, in which Artaud had been invited to participate by the director of dramatic and literary programmes, Fernand Pouey. The latter, however, gained recourse to a committee of personalities, including Georges Altman, Jean-Louis Barrault, René Clair, Jean Cocteau, Max-Pol Fouchet, Paul Guth, the Reverend Father Laval, Pierre Herbart, Louis Jouvet, Pierre Laroche, Maurice Nadeau, Jean Paulhan, Raymond Queneau, Georges Ribemont-Dessaignes and Roger Vitrac, who were to listen to the recording on February 5, 1948 in a studio in the rue François-1er unit. In the face of opposition, the Director-General evaded the issue by claiming he did not feel duty-bound by their favourable verdict. He maintained the ban and Fernand Pouey resigned.

By Artaud’s request, a second private transmission of the broadcast was organised by Fernand Pouey, before he definitively left his post, for a certain number of people who were absent on February 5. It took place on Monday, February 23, 1948 in a disused cinema, dependent on the Radio, the Washington (curiously enough, this is also the name of the boat that would bring him back from Ireland in September 1937), rue Washington. At the conclusion of this session, which brought a new success for Artaud, his friends Marthe Robert and Arthur Adamov were to express certain reservations – which appeared to strike a sensitive note with Artaud, in a letter he addressed to Paule Thé venin on February 24:

“The criticism of M. and A.A. is unjust but the starting point must have been a failure to make the transition,

this is why I’ll never intervene on the Radio again, and from now on will concentrate myself

to the theatre as I see it,

a theatre of blood,

a theatre which with every representation will have gained

he who plays as well as he who comes to see the play,

we do not play,

The theatre is in reality the genesis of creation. 1

The programme itself is composed of a set of texts that Antonin Artuad conceived for the event, dictated to a secretary placed at his disposition by the Radiodiffusion, in November 1947. The montage can be broken down in the following way:

In his letter of protest to Wladimir Porché, director of the Radiodiffusion, reproduced by Paule Thévenin in the “Dossier de Pour en finir avec le jugement de dieu” in the thirteenth volume of the Complete Works of Artaud, published by Gallimard, Artaud wrote:

“I wanted a new work that catches certain organic points in life,

in which we feel the whole nervous system

in pursuit of this new, strange and radiant Epiphany in the sky.

Anybody, down to the coal merchant, must understand being fed up with the filth-

-physical, as well as physiological,

and DESIRES an in-depth

We can refer to the extensive aforementioned notes and notably to a number of letters Artaud addressed to the various protagonists in this affair, to Fernand Pouey in particular, who put his position in the balance and “used it to tip the scales.”

The script of the transmission was published in April 1948 by K éditeur, a short time after the death of Artaud on March 4, 1948. Before its republication, in an extended version with supplementary material including the letters and press articles, in the Oeuvres complétes, a relatively poorly printed pirate edition was available in several Parisian bookshops on the Left Bank during the summer of 1973-proof of the interest aroused by this text. This time we are releasing the integral recording of the broadcast which produced, in Artaud’s own words, “a devil of a snag.” 4

The ban of this work was the last great deception wreaked upon Artaud, who considered it “as at last a first rendering of the theatre of cruelty.”

1 Oeuvres completes, XIII, Paris, Gallimard, 1974, pp. 146 -147. For further information on Artaud and the theatre in general, notably the manifesto of the theatre of cruelty, refer to Le théâtre et son double. 1 was translated in works from the final period by Antonin Artaud. Edited and translated by Clayton Eshleman with Bernard Bador (Boston: Exact Change, 1995).

4 Letter to Marc Barbezat, February 16, 1948 in Artaud, L’Arve et Faume, Décine (Rhône), L’Arbaléte, 1989, p. 96. An invaluable volume of drawings by Artaud was published by Jacques Derrida and Paule Thévenin by Gallimard (1986). Following this a catalogue of drawings was published by the Musées de Marseille and the Reunion des Musées nationaux in 1995, and a catalogue by the MoMA, New York in 1996.