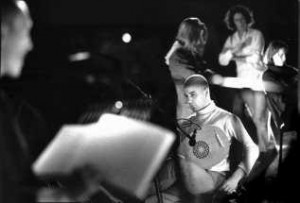 In 1999 ROARATORIA was 20 years old, in 2000 The Canterbury Tales of Geoffrey Chaucer are 600 years of age. Therefore, as a birthday gift and in honour to two wise Men of the past millennium:

On the basis of the roaratorie score a new realisation has been made in cooperation with Het Toneelhuis in Antwerp, the Belgian Radio 3 and the ensemble Zefiro Torna: “Chauncecleer, a Medieval Circus on the Canterbury Tales”.
Even though the original score was meant for radio play, with Chauncecleer we made a piece of music-theatre in the Cage tradition: a reader stands in space and performs the text. Five solo musicians (two soprano’s, lute, fiddle and flute) perform 14th century English, French, Italian and Flemish music. A computer-based multi-track system distributes the more or less 1870 sounds of the two lists through 16 loudspeakers. The audience is free to walk amidst all this. As each listener is in a unique place, and every sound source distributes different sounds, everybody hears a different concert.

How the piece will sound is – because of the spatial setting – not exactly predictable, or at least not for everybody in the same way. But it is beyond doubt that it will be an hour of pretty chaotic and dense sound. A Cageian circus = a lot of noise. This is remarkable for the composer whose entire work is centered around one concept: silence. 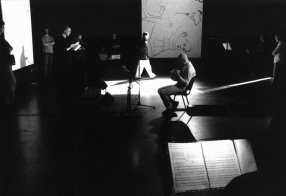 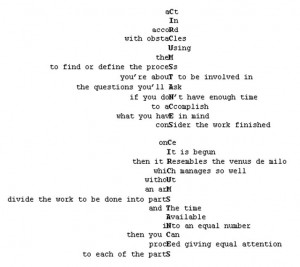